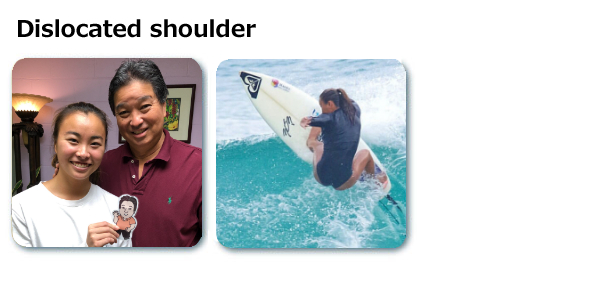 I started surfing with my older sister at age 9. Since then, we gradually started competing in events on Oahu. In 2014 at age 13, my sister age 15, we surfed in our first JPSA (Japan Pro Surfing Association) event. As sisters we were both qualified to become “professional surfers”.
Competing in the JPSA tour for few years, in 2017 I won few events and achieved my goal to become grand champion.

Currently we compete in the QS (Qualifying Series) events which is an international tour to qualify into the championship tour where all the top surfers such as Carissa Moore, Kelly Slater, John John Florence, etc. compete in.
Competing since young, I had mental toughness to push through physical pain and discomfort.
With flexibility in my joints, I had a shoulder dislocation that became a big problem in competing.
Due to a second dislocation, and high possibility of it happening again in the future, I had my dislocation surgery on November 19th, 2019. The surgeon then told me the muscles, joints and ligaments will take at least 3 months to completely heal.

I felt anxiety and frustration knowing I had no choice but to accept the inability to compete in all the upcoming events held in March and miss participation in the Olympics Training Camp. It will take long fortitude to get back in the ocean. Then not long after my operation was complete, a fellow competitor Hiroto Ohara’s mother referred us to visit Dr. Raymond Yoza because her son had healed from an injury unbelievably fast. With some hope and doubt of resonant healing, I thought “why not giving it a try”.

The treatments were exactly what I heard in rumors. The doctor gives patients distanced “energy from hand”.  Even without any contact with the doctor’s hand, I would have a variety of outcomes. During a treatment I once felt my shoulder getting cold, other times I would be unable to drive back home because my shoulder was sore and tender, but there would even be some days I would feel nothing.

With curiosity my therapist asked me, “Who is this Doctor and what does he do to treat you?” As a result, I was in full motion two weeks ahead of three months. Dr. Yoza’s treatments is mysterious but I know and believe he has given me the energy to heal. Resonant healing has no side effects; the cells in our body reacts from the energy given to heal any physical or mental problems. With that said, I was able to get treatments with no fear and would like to continue treatments for my health. As a conclusion, I entered for the events in March and will participate in the Olympic Training Camp. I never thought of healing this quickly and I am thankful for Dr. Yoza and his office for providing me with good care and sincerity.